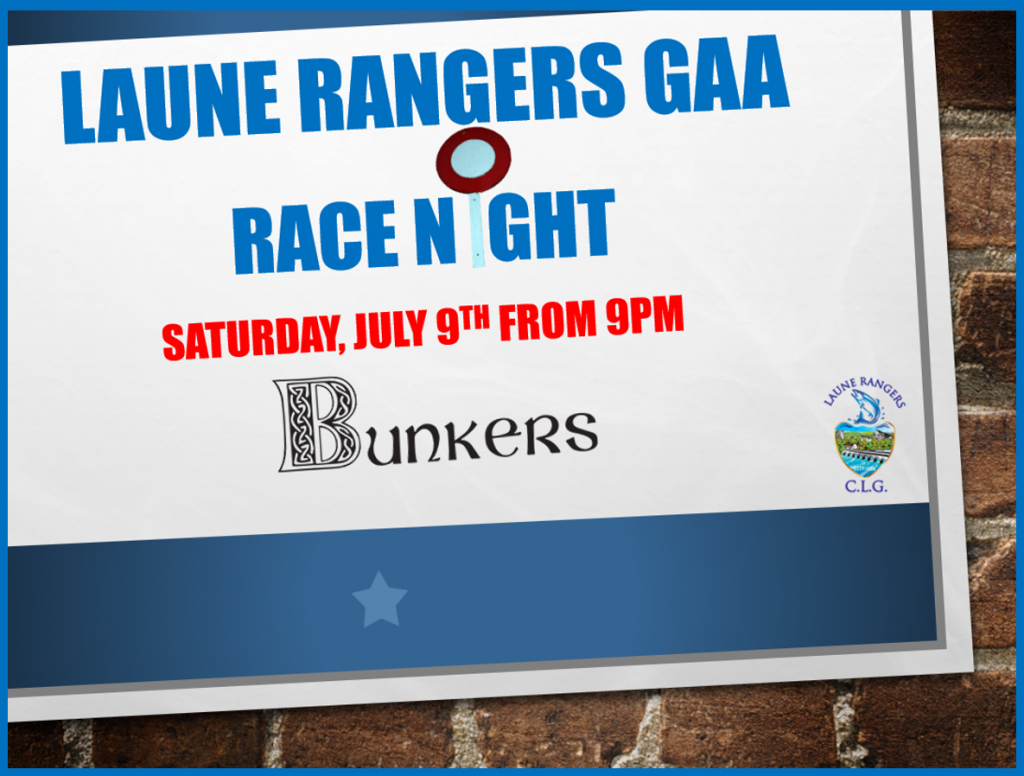 SENIOR FIXTURES: The final round of fixtures in the County Senior Football League takes place this weekend.  The A team host Templenoe in Division 2 on Friday night while the B team travel to Asdee in Division 5 on Saturday.  Throw in for both games 7:30pm. 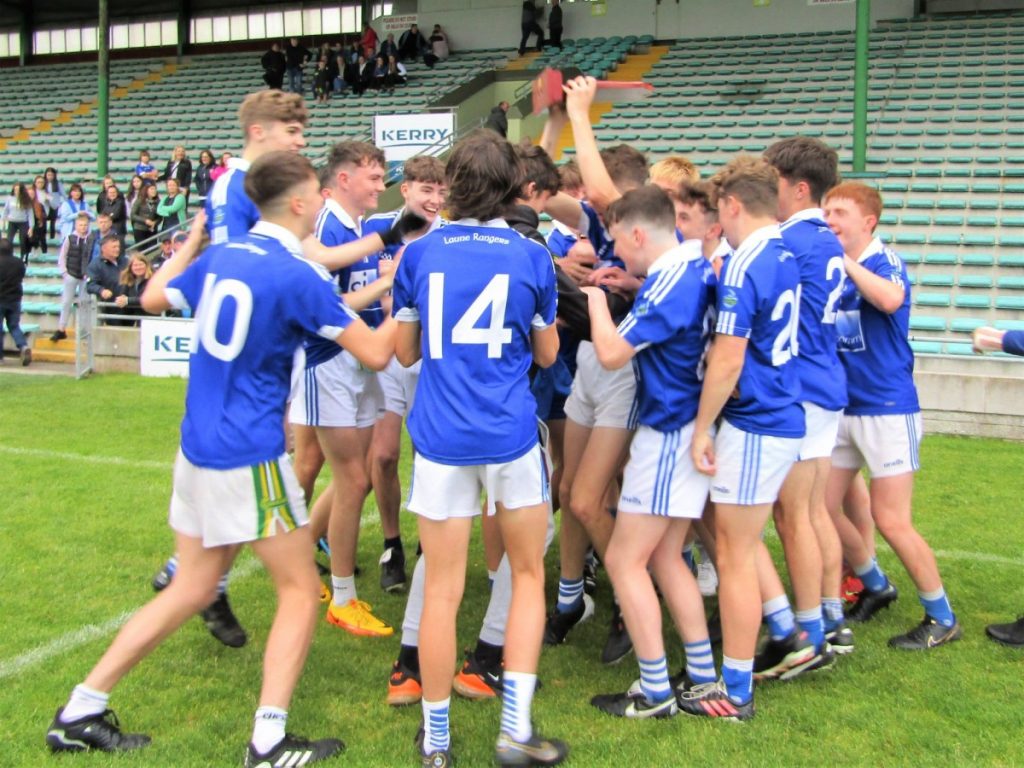 MINOR CHAMPIONSHIP: The County Minor Championship gets underway on Monday, July 18th, and Laune Rangers will travel to South Kerry in the first group game in Glenbeigh.

UNDER 15 BOYS: Laune Rangers defeated Ballymacelligott in their second game of the Central Region Under 15 Division 1 on Wednesday evening, with some confusion after the final whistle adding late drama to what had already been an entertaining game.  The sides each scored points in the opening minutes before Rangers point scorer added his team’s first goal to give the visitors a lead that they would not let go of for the remainder.  A Ballymac pointed free was nullified by one by Tomás Joy before Laune Rangers second goal was scored – Patrick O’Donnell lobbing the goalkeeper after intercepting a kickout for a super finish.  Rian Hogan and Tomás Joy (free) added points to leave Laune Rangers ahead by 2-4 to 0-2 with fifteen minutes played.  Another pointed free by Tomás Joy was followed by a James Jones point before Ballymac scored a point of their own.  However, Adam O’Neill put the final touch to Laune Rangers third goal just before the short whistle.  Half Time Score:- Ballymacelligott 0-3, Laune Rangers 3-6.  Although Rangers had a commanding lead at the break, it proved far from insurmountable as a point in the opening minute of the second half was followed by a Ballymac goal, although the awarding of the goal was greeted by surprise by both teams as the ball appeared to travel neither between the posts or under the bar.  Ballymac had all the momentum by now and added two pointed free to halve the gap that separated the sides at half time.  Adam O’Neill had a shot at goal saved by the Ballymac goalkeeper before Rangers did score their fourth goal – the goalkeeper penalised for a frontal charge before James Jones cooly slotted the penalty to the net.  With fifteen minutes to play, Laune Rangers led by 4-6 to 1-6.  To Ballymac’s credit, they never gave up and continued to press forward.  Two points (1 free) were followed by a second goal by the hosts before Rangers added a final point through Jamie Flynn.  However Ballymac scored a late goal that caused drama when the final whistle sounded, as their was confusion as to the score in the referee’s notebook who had tallied the game as a draw initially, before it became clear Rangers had scored four goals in the game to win by two.  Full Time Score:- Ballymacelligott 3-8, Laune Rangers 4-7.  Laune Rangers:- Adam Radny, Ciarán Birmingham, Aaron Doyle, Daniel Kelly, Patrick O’Donnell (1-0), Charlie O’Sullivan, Rian Hogan (0-1), James Jones (1-1, pen), Tomás Joy (0-3f), Colm Evans, John Horgan, Oran O’Sullivan, Jamie Flynn (0-1), Bryan McKenna (1-1), Adam O’Neill (1-0).  Subs used: Liam O’Connell for O O’Sullivan, Dylan Flynn for Joy.

UNDER 14 GIRLS: Laune Rangers Under 14 Girls travelled to Ballyduff on Sunday afternoon, but were soundly defeated by the home side in the County League.

UNDER 13 BOYS: There was ultimate disappointment for the Under 13 White team in the County League Division 13 Final on Sunday evening, as a late John Mitchels winning point saw the Tralee side to victory after a fantastic battle in Milltown.  Darragh McKenna was first to register a score with a well taken point before John Mitchels nullified it with one at the other end.  Laune Rangers scored the first goal of the game as Jack Buckley put the finishing touch to a great team move.  Liam O’Shea scored an excellent long range point to cancel out a point by John Mitchels before Rangers struck for their second goal – Darragh McKenna with a great finish to the top corner.  John Mitchels pointed to leave Laune Rangers ahead by 2-2 to 0-2 at the midway point of the first half.  Another John Mitchels point was nullified by a Darragh McKenna effort, before Tommy Foley rolled in Rangers 3rd goal.  Mitchels continued to add points to the scoreboard with some great scoring, but Rangers scored a fourth goal through Billy Gannon who also added a point, although a late goal by the Tralee team left Laune Rangers ahead by four at the break.  Half Time Score:- Laune Rangers 4-4, John Mitchels 1-9.  Goals were added at both ends at the beginning of the second half – Odhran Clifford hitting the net Rangers fifth and final allowable goal (5 goal rule in place).  Darragh McKenna added a couple of points, but Mitchels were on the ascendancy and by the three-quarter mark the scores were level at 5-6 to 3-12.  With no fear of another three pointer being conceded, John Mitchels were able to use their goalkeeper as another defender and push up the field.  John Mitchels took the lead momentarily before Liam O’Shea scored to level matters, while Jack Buckley also cancelled out a point for Mitchels to see  the scores level going into injury time.  There was time for one final score as John Mitchels pointed to take a late lead that Rangers couldn’t catch.  Full Time Score:- Laune Rangers White 5-8, John Mitchels 3-15.  Laune Rangers White:- Fionnán Quigg, Adam Conway, Mikey Dwyer, Kieran Brennan, Henry Whittleton, Eoghan Doona, Jaego Ferris, Liam O’Shea (0-2), James Kearney, Darragh McKenna (1-4), Odhran Clifford (1-0), Peter O’Shea, Tommy Foley (1-0), Oisín Clifford (capt), Jack Buckley (1-1).  Subs: Billy Gannon (1-1), Darragh Ferris, Myles Cahill, Daire Carroll, Conor Ferris, Seán Kearney; Noah Russell, Jack Gillespie, Daithí O’Sullivan.

SCÓR NA BPAISTÍ: The Kerry final of Scór na bPáistí, a competition for primary school children, took place on Saturday afternoon in Dromid Community Centre. Laune Rangers were represented in the quiz by Peter O’Shea, Kieran Patton, Darragh McKenna and Eugene Mulligan while Fionnán Quigg took to the stage with his recitation.  The quiz team put on an impressive show coming 4th out of 11 teams with a very respectable score of 29 out of 40.  Fionnán put in a very fine performance for his recitation and finished an excellent 3rd. 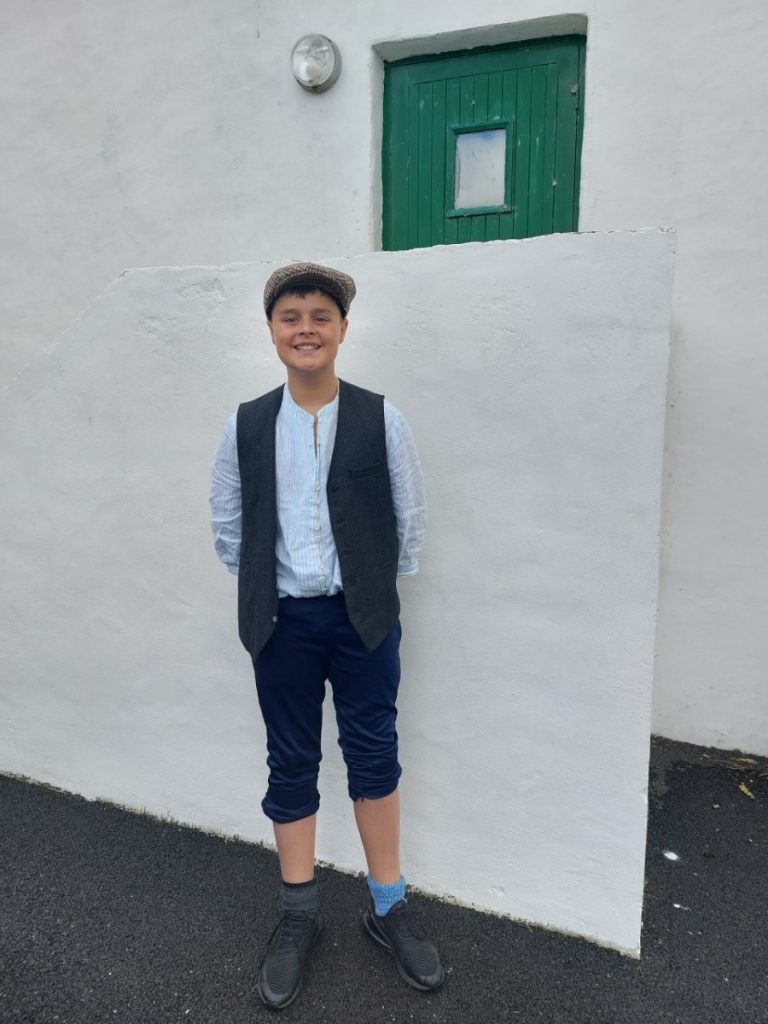 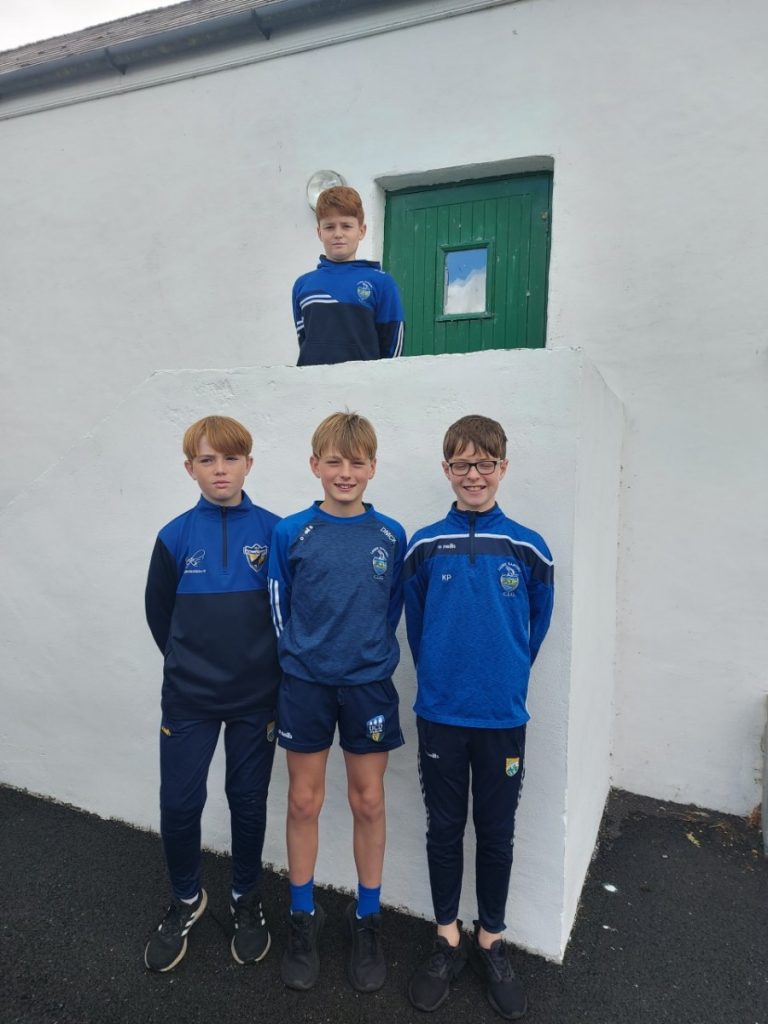