A Gearóid Hassett hat-trick highlighted a seven goal display by Laune Rangers in Killorglin on Saturday evening, as they comprehensively defeated St Senans.

Senans were short their Kerry Senior Hurling contingent, which weakened them on the night, although – much like the previous two games – Rangers also had to do without county U20s Eoin Clifford & David Mangan as well as injured Dáire Cleary and captain Kieran Crowley.  In fact, both sides looked quite young on the night, as Rangers fielded a team with an average age of 23.

The first quarter was tightly contested, as the sides went into the first water break tied at 0-3 a piece – Paudie Quille (free), Seán Weir & Thomas Dillon pointing for the visitors with Jack O’Connor, John Tyther (free) and Gearóid Hassett scoring for Rangers.

Fiachra Clifford (free) and Gearóid Hassett pointed Rangers ahead, as Paudie Quille slotted a free at the other end to leave a single point between the sides.  However, Rangers scored two goals in as many minutes to take a commanding lead – Gearóid Hassett getting a fist to a dropping ball for the first and Mark O’Connor with a great finish on the half-volley for the second.  Hassett scored another point to lead by eight at the break.

A goal and point from Fiachra Clifford at the start of the second half was answered immediately by the same for Senans – Quille pointing a free before receiving a pass from Seán Weir to hit the net.  A super point from play by Peter Crowley was nullified by another Paudie Quille free, before Gearóid Hassett & substitute Matt Leslie extended the lead for the home side.  Gearóid Hassett got his fist to a great pass by Matt Leslie to knock in a fourth goal to see Laune Rangers leading 4-10 to 1-6 at the second water break.

Gearóid Hassett completed his hat-trick with another goal, and added a point before being called ashore having contributed 3-5 from play.  Gabriel Griffin was introduced in his place for his Senior debut, while Eoin O’Sullivan also entered the field having suffered a horrible ACL injury seconds into his Senior debut in January 2020.

Goalkeeper Jason Browne got in on the scoring with a well taken 45 before the net was rattled twice more, as both Gabe Griffin and Matt Leslie scored super goals.  Paudie Quille scored a pointed free for the visitors, but Rangers completed the rout by adding final points from Matt Leslie & Gabe Griffin.

Needless to say, Rangers attack was in sintilizing form on a night where they scored 7-14, with all bar 3 points coming from play.  Gearóid Hassett’s tally of 3-5 was well deserved – indeed three of his points may well have rippled the net as they flashed over the bar.  Outside of him and Fiachra Clifford who caused chaos in front of goal, the half back line were outstanding 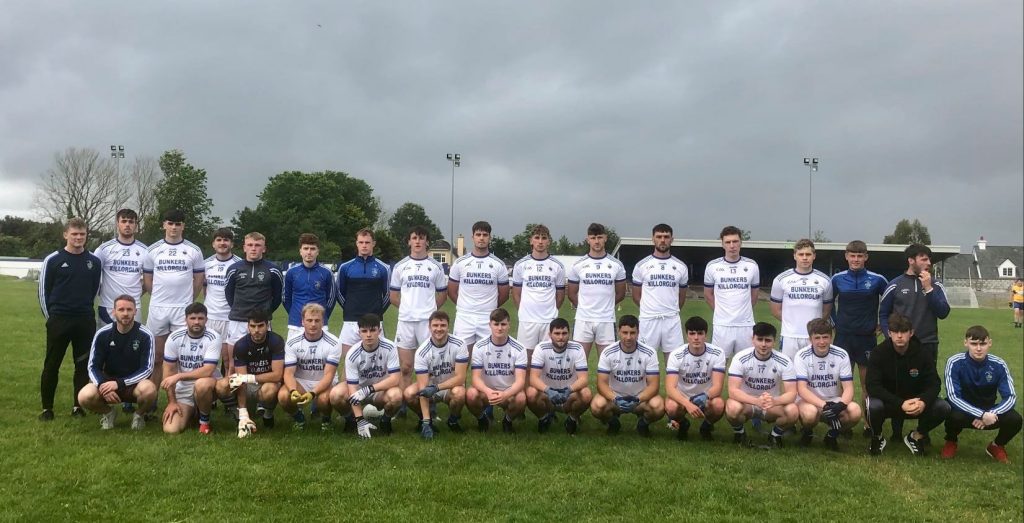