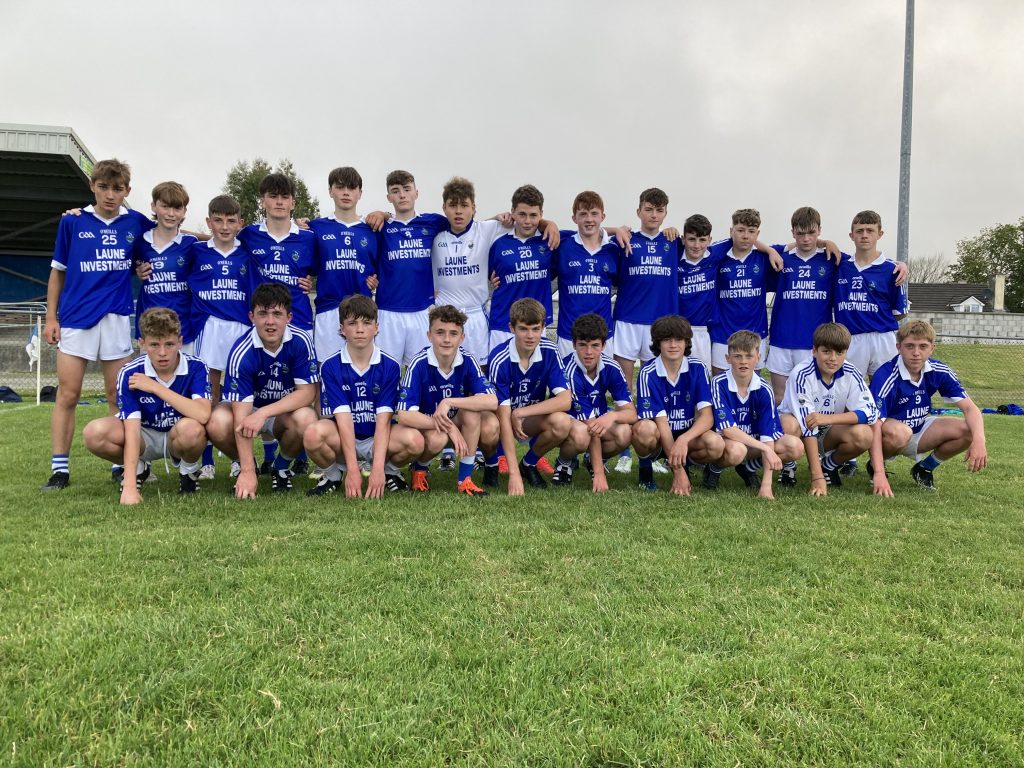 Laune Rangers will contest the Final of the Lee Strand County Under 15 Leagues Division 1, following victory over Keel/Listry in JP O’Sullivan Park on Wednesday evening.

Before the game took place, a minute’s silence was observed for the late Thomas Healy of Beaufort, who was a classmate and friend of a number of the players on the field, and who passed in tragic circumstances a week ago.

Laune Rangers scored first with a super point from Seánie Diggin on the first play of the game.  Keel/Listry levelled a minute later from a pointed free, but when Rangers scored again from a pointed 45 by Darragh Clifford – after Conor Buckley had seen his shot saved and turned around the post – the home side held on to the lead for the rest of the game.  Stephen Gannon pointed a free before Logan Foley scored the game’s first goal after a great move.  Gannon and Clifford added points for Rangers before Keel/Listry got on the board again, pointing a free before finding the net from the penalty spot to see the visitors trailing by 1-5 to 1-2 at the first water break.

Keel/Listry pointed another free before Rangers struck the net for a second time – Conor Buckley making no mistake with the finish.  Seánie Diggin scored another excellent point as Rangers began to put their stamp on the game, and Diggin and Darragh Clifford pointed late on to see the home side take a deserved eight point lead into the break.

Keel/Listry began the second half as their hosts had begun the first, scoring a point with the first play after the restart which incidentally was their first score from play.  Darragh Clifford (free) and Stevie Gannon added points before Keel/Listry scored their second goal – a good finish into the corner required to beat Patryk Radny in the Rangers goal.  Laune Rangers responded well though, and scored points through Logan Foley & Niall Tadhg O’Brien before Darragh Clifford got on the end of a great move to score his team’s third goal and put Rangers ahead by 3-12 to 2-4 at the second water break.

Laune Rangers played out the last ten minutes with 14 men, as David O’Brien received a black card for fouling his man in the square, as Keel/Listry scored the resulting penalty to give themselves a glimmer of hope.  However, Rangers were not to be beaten on the day, and a final pointed free by Niall Tadhg O’Brien saw Rangers win the game and progress to the County Division 1 Final.

Laune Rangers Blue will play Austin Stacks in the County U15 Division 1 Final.  The White Team will contest the Division 9 Final against the winner of Dr Crokes B & Austin Stacks B who play Friday evening.  No details have been released for either Final