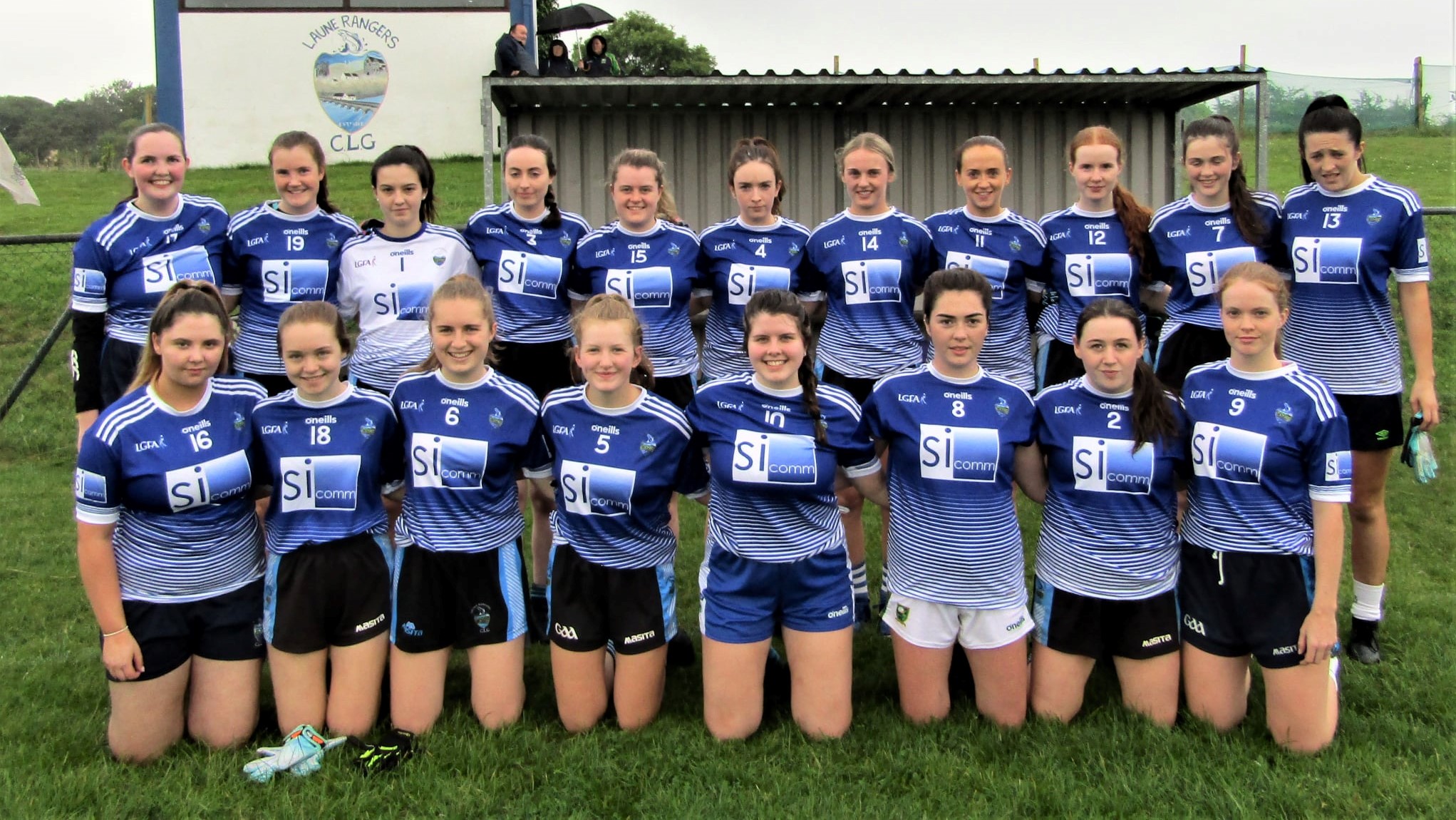 The wet weather at JP O’Sullivan Park didn’t dampen the celebrations at the final whistle, as Laune Rangers defeated local rivals Cromane in the Donal Curtin Cup on Monday evening.

In a tight, physical encounter, Cromane were first to score as Cora Joy knocked over a point.  Rangers responded immediately as Fodhla Houlihan stuck the ball into the bottom corner of the net for a great goal.  Houlihan added a point, but an Eimear Burke point followed by a goal by Cora Joy saw the visitors leading by a point after six minutes.

Meadhbh Johnston levelled matters before Cromane scored three on the bounce through Roisín Griffin (2) and Eimear Burke to see the away side leading by 1-5 to 1-2 at the first water break.

Fodhla Houlihan pointed a free for Rangers, but Cromane were on the ascendancy in the first half. Cora Joy pointed before Roisín Griffin hit the net for a second Cromane goal.  Fodhla Houlihan responded by scoring another super goal, sticking the ball into the top corner of the net.  However, Cromane cancelled it out by scoring a third goal to take a six point lead into the break, although this may have been more but for a missed penalty as well as a super save by Lucy Cahill in the Rangers goal.

Laune Rangers came out of the interval a different side, and set about clawing their way back into the game.  Fodhla Houlihan completed her hat-trick with a third goal in the first play of the second half to halve the deficit.  Hannah Joy pointed for Cromane before Nicole Moriarty nullified it with a pointed free.  A Roisín Griffin point put Cromane four ahead, although Rangers were now in full flow.  Fodhla Houlihan was chopped down in front of goal for a Rangers penalty, and the mercurial forward made no mistake with the spot kick for her and her team’s fourth goal to leave the minimum between the sides at 3-8 to 4-4 at the second water break.

The stoppage in play for the water break didn’t break the Rangers momentum as the Laune were now dominating possession, as Rachael Evans, Kayleigh McGlashan and Meadhbh Johnston were driving their team forward.  Substitute Maggie West scored a super point to level the game, before Rachael Evans added another excellent point to give Rangers the lead.  Fodhla Houlihan and Nicole Moriarty added further points to put a goal between the sides, and the final five minutes saw a defiant Laune Rangers defence hold out Cromane.  As Cromane were awarded a free outside the 21 metre line, Cora Joy slotted it over the bar before the final whistle was blown.

Cromane had a strong start to the game, as Cora Joy and Roisín Griffin were scorers in chief as Eimear Burke fed them from centre forward.

The second half team performance by Rangers was simply outstanding.  Having trailed by six at the short whistle, the defence held Cromane to just three points to provide the basis for a great comeback.  Adding the ball-carrying of Rachael Evans, Kayleigh McGlashan, Meadhbh Johnston and Andrea Nolan to provide the link from defence to attack, it allowed the forwards flourish, especially Fodhla Houlihan who ended with 4-3, with 3-2 coming from play.

It was a big win for Rangers, as they got the better of a Cromane team that contained a number of former Laune Rangers players and ex-teammates of theirs.