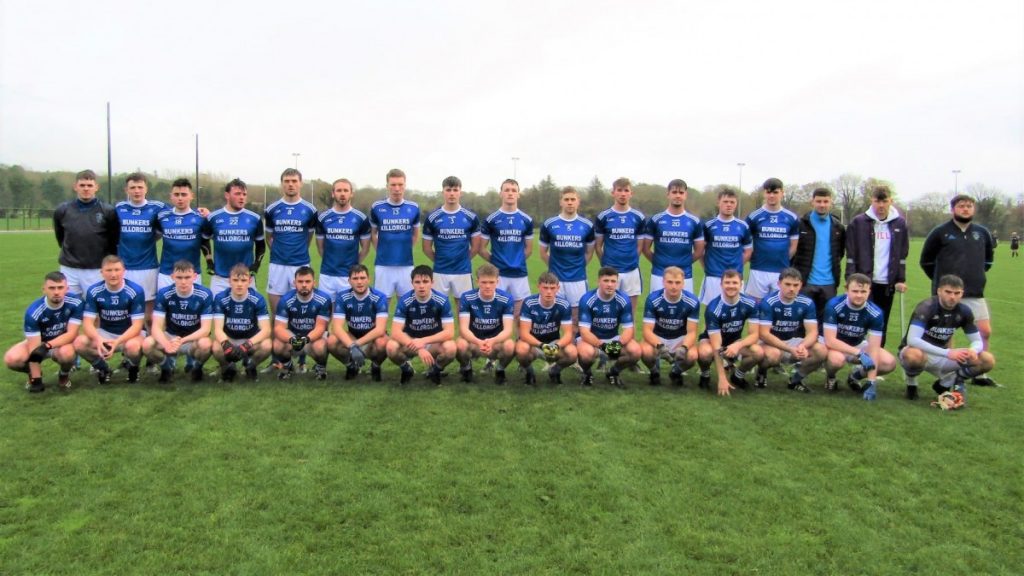 Laune Rangers will contest the 2021 Mid Kerry Senior Championship Final following victory over Milltown/Castlemaine in Paddy Burke Memorial Park on Saturday afternoon, bringing to an end the two year reign of their hosts who won the title in 2019.

Both sides had absentees for various reasons.  Milltown/Castlemaine were without Ciarán O’Connor, Donal Dennehy and Cormac Leane while Laune Rangers had to make do without Seán Cleary, Conor Murphy, Jack O’Connor & Matt Leslie as well as long term absentee David Mangan.  This, of course provided an opportunity for others to lay their claim to a jersey on both teams.  The notable inclusion for the home team was that of goalkeeper Derek Twiss, while standing in front of him at full forward for Rangers was Mike Frank Russell, who was making his first appearance in the competition since 2017.  Another welcome returnee was Shane McSweeney after an injury filled year.  Laune Rangers also started with Shane Doona at corner forward, who was making his first Senior appearance since pre-Covid.

The last time the teams met, the home side scored an early goal and lightning struck for a second time as Milltown/Castlemaine found the net after a couple of minutes – Jonathan O’Sullivan’s point attempt coming back off the crossbar into the path of Cathal Moriarty who smashed the ball into an empty net.  Laune Rangers were quite wasteful in the opening stages, spurning a few chances, but got on the board with a well taken point by John Tyther.

Ten minutes would pass before the game’s next score, as Shane Doona scored a super point to narrow the gap, but Cathal Moriarty cancelled it out with a point to see Milltown/Castlemaine going into the 1st water break leading by 1-1 to 0-2.

Kieran Carroll extended the Milltown/Castlemaine lead with a point but Shane Doona replied with another excellent point.  Milltown/Castlemaine were given an opportunity to put five between the sides in the 26th minute when Cathal Moriarty was fouled and adjudged to be inside the square for a penalty.  However, Moriarty saw his shot saved by a super effort by Jason Browne who got down low to his left to tip the ball onto the post and out for a 45.  A pointed free at the other end by Fiachra Clifford meant there was only the minimum between the sides at the break.  Half Time Score:- Milltown/Castlemaine 1-2, Laune Rangers 0-4.

The home side led by four with six minutes of the second half played as Jonathan O’Sullivan pointed two frees while Kieran McKenna pointed another from play.  From then though, Laune Rangers put in an enormous effort to get back into the game.  Kieran Doona stemmed the tide with a good point before John Tyther slotted a free.  Laune Rangers took the lead in the 41st minute as a point effort dropped short to Derek Twiss before Gearóid Hassett dispossessed the goalkeeper.  Twiss brought Hassett to ground causing the ball to spill and after a couple of slow-motion seconds, John Tyther tapped the ball to the net.  Referee Paul Hayes consulted with his umpires who then raised a green flag to signal a goal.

Milltown responded well to level the game with a point by Jonathan O’Sullivan, but Fiachra Clifford restored the visitors’ advantage with a pointed free to leave Laune Rangers ahead by 1-7 to 1-6 at the second water break.

Fiachra Clifford doubled the Rangers lead with a point before tempers got overheated temporarily, pausing proceedings for a short while, but Rangers were not about to let their heads drop.  The away side kept their focus on the resumption and Gearóid Hassett pointed to put his team three ahead.  Cillian Burke replied with one for the hosts but Hassett added a super score to restore the three point cushion.  As Milltown/Castlemaine pressed forward, Laune Rangers’ excellent backs overturned the ball and countered downfield, finding half time substitute Dáire Cleary who split the posts to make sure of the win as the final whistle was blown on the kickout.  Full Time Score:- Milltown/Castlemaine 1-7, Laune Rangers 1-11.

The penalty save by Jason Browne served as somewhat of a shift in momentum in the game – had Cathal Moriarty scored, it may have seen Milltown build an insurmountable lead at the start of the second half.  The return performances by the two Shanes – McSweeney and Doona – were excellent, as every player grew into the game.  However, it was the efforts of Seán Arthurs at full back for Rangers that stood out on a day that saw Rangers play with the oldest starting fifteen for a while – the 15 starting players averaging at a ripe old 26 years old!