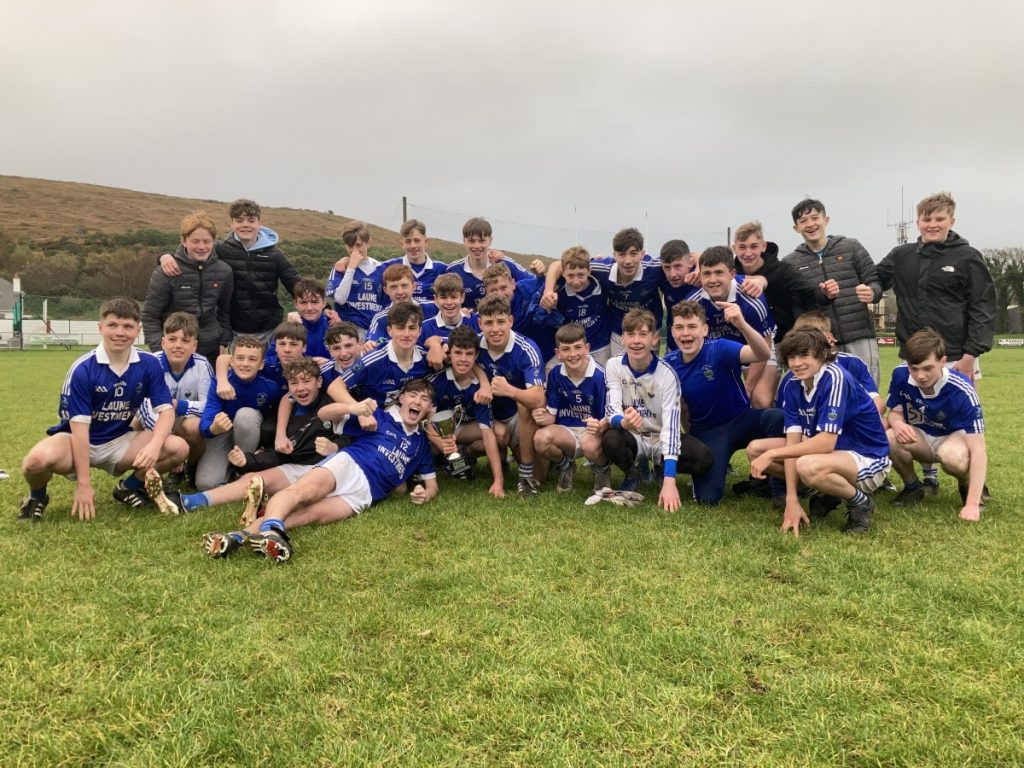 Having gotten underway last week for the four other clubs in the district, the Mid Kerry Under 15 Competition was altered and instead went straight to Finals day, with the A, B and C Finals all taking place in Glenbeigh on Sunday.

A super second half display by Laune Rangers overturned a one point deficit at the break into a comprehensive win against Keel/Listry to secure the Mid Kerry Under 15 title on Sunday afternoon.

Keel/Listry had the benefit of a game under their belts last weekend, and it was evident as they were quickest out of the traps.  Harvey Mangan was required to make an early save to force a 45 that generated a Keel/Listry point to open the scoring.  Patryk Radny scored a long range point to level matters, and Keel/Listry hadn’t long scored to go ahead before Darragh Clifford pointed a free to equalize again.  Rangers first goal came in the 15th minute as Eoin O’Connell got on the end of a great pass to put the ball past the goalkeeper, giving his side a three point lead.

Keel/Listry hit a purple patch, and were ahead by the 21st minute with four points (2 frees).  Darragh Clifford pointed Laune Rangers level with another well taken free before Rangers scored their second goal – Niall O’Brien with an outstanding solo run down the left flank before applying a finish from what looked like an impossible angle.  However, Keel/Listry rallied again and scored four points in the final minutes of the half to take the lead into the break.  Half Time Score:- Laune Rangers Blue 2-3, Keel/Listry 0-10.

The second half was 12 seconds old when Rangers levelled, as Darragh Clifford pointed from distance, and from the resulting kickout, Darragh Clifford put Rangers ahead with another excellent point.  Keel/Listry pointed a free but from there, Laune Rangers took control with a display of outstanding point-taking.  Points from Stevie Gannon, Darragh Clifford (2) & Niall O’Brien (2) saw their side five ahead at the second water break.

In the 47th minute, Patryk Radny scored Rangers’ third goal – this time the long range shot by the midfielder dropped short and over the reach of the unfortunate goalkeeper.  Rangers hit the net for a fourth time, but it was ruled out for a foul in the square.  Keel/Listry scored their final point in the 50th minute, but Rangers weren’t finished attacking as Patryk Radny (2), Niall O’Brien & Darragh Clifford (2 frees) to put the seal on a fantastic performance.  Full Time Score:- Laune Rangers Blue 3-15, Keel/Listry 0-12.

The shooting prowess of the Laune Rangers scorers was the main talking point from the game, as the majority of their 11 points from play came from 30+ metres out.  On the other side of the field, Gavan Mangan put in a superb defensive display, as did captain Mattie Spillane who led his team by example.  While arguments could be made for any one of a half dozen players, the official man of the match was presented to Darragh Clifford who finished with a fantastic eight points – four difficult frees and four outstanding scores from play.

The Mid Kerry Under 15 A competition has a new Cup to play for, and it served a poignant moment after the game, as Matthew Spillane became the first captain to collect the cup named after his friend Thomas Healy from Beaufort, who passed away in July.  Matthew was proud to be presented the Cup by Thomas’ brother Danny.

Earlier in the afternoon, Laune Rangers White team faced off against Beaufort in the Mid Kerry C Final.  Horrendous conditions saw Beaufort score a couple of fortuitous 1st half goals as the ball splashed around in the puddles in front of the Laune Rangers goalmouth.  Scores were level at 1-1 a piece after 7 minutes as Colm Evans pointed and Rian Hogan scored an excellent goal, before Beaufort tapped in a second goal to lead at the water break.

3 goals in the second quarter gave Beaufort a commanding lead at the break.  Half Time Score:- Laune Rangers White 1-1, Beaufort 5-2.

Alex Garry opened the scoring at the beginning of the second half but Beaufort added three more points.  Colm Evans pointed before Beaufort scored a 6th goal to lead by 6-5 to 1-3 at the second water break.  Rangers attacked for the duration of the final quarter and added points by Bryan McKenna & Tomás Joy, but it was Beaufort’s day.  Full Time Score:- Laune Rangers White 1-5, Beaufort 6-5.