Laune Rangers B secured Division 5 status in the County Senior Football League on Saturday evening with an away win against Asdee.

Played in glorious sunshine, Laune Rangers were slow out of the traps, conceding five points (1 free) in the opening nine minutes, but eventually settled into the game.  The visitors’ first score came from an offensive mark through Mike Frank Russell, but the home side were leading by 0-5 to 0-1 with fifteen minutes played.

Mike Frank Russell pointed a free before Cillian Foley ended a fine run with a point from play.  After Russell had slotted another free, Marc Clifford scored an excellent point to level matters.  Two pointed frees for the home side regained the lead for them, although Rangers finished the half in great style and Marc Clifford, Eamonn Carey and Mike Frank Russell (free) gave Rangers the lead at the break.

Asdee pointed to level the game early in the second half, but Rangers began to pull away in the third quarter as Cillian Foley, Gabe Griffin & Marc Clifford all pointed.  An Asdee point was cancelled out by Cillian Foley before Laune Rangers scored their first goal – Ciarán O’Sullivan with a great finish.  Gabe Griffin pointed to nullify an Asdee free to leave Laune Rangers leading by 1-12 to 0-10 with fifteen minutes to play.

A point for substitute Cian O’Shea dissected an Asdee brace before Rangers netted again – Gabriel Griffin finding the net after Darragh O’Shea and Ciarán O’Sullivan had done well out of defence before the ball was worked upfield.  Cian O’Shea (2) and Morgan O’Sullivan added excellent points, while Asdee scored the final point of the game. 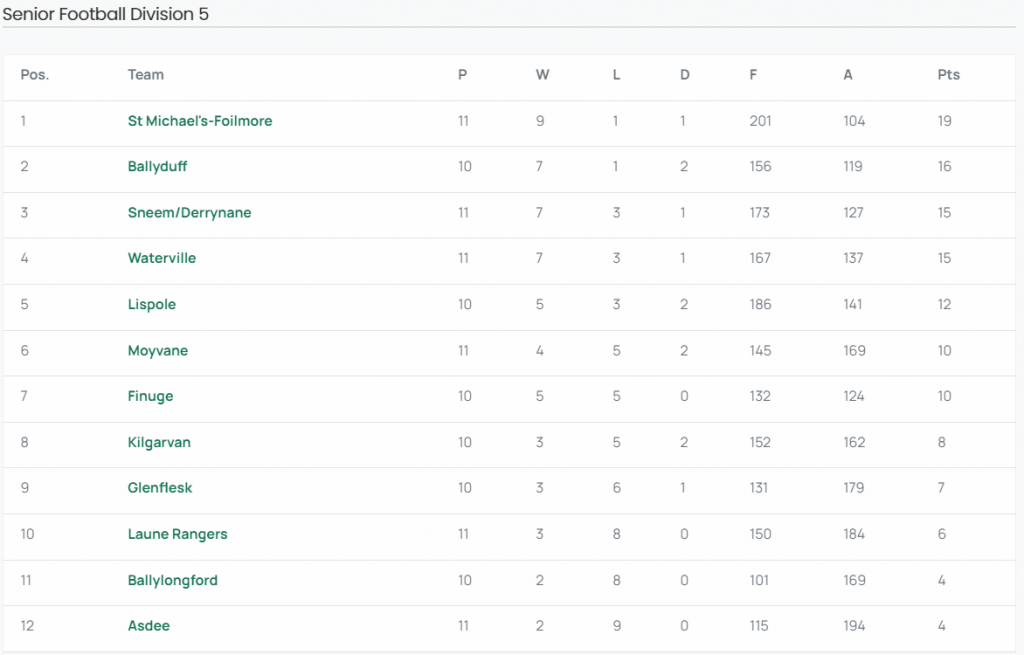