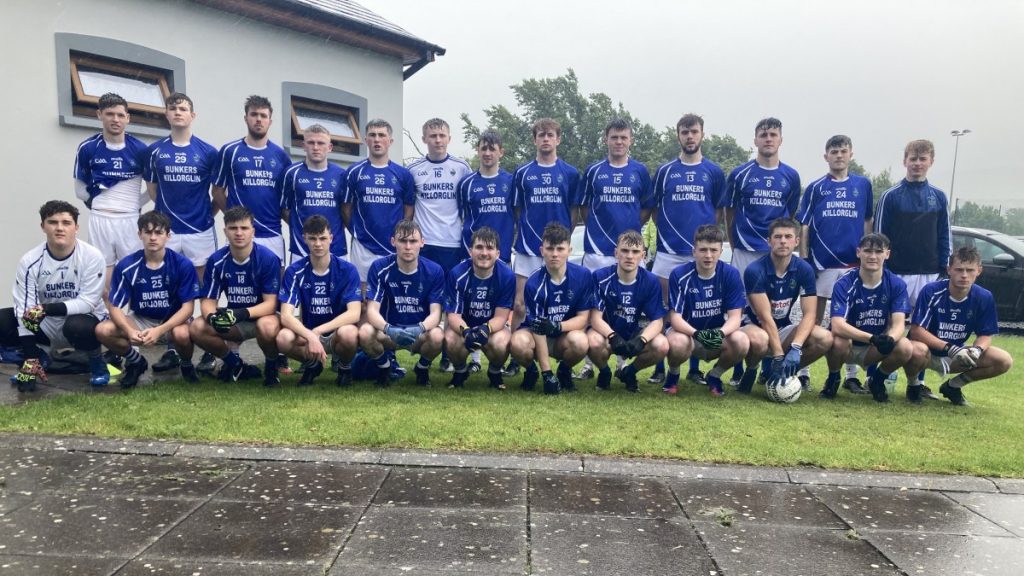 Laune Rangers were defeated by St Brendans on Monday evening in Round 1 of the County Under 21 Championship, but it took 80 minutes to separate the teams in atrocious wet and windy conditions in Blennerville.

Much fancied St Brendans were littered with players that had worn the Kerry jersey at Minor and/or Under 20 level in recent years – eight of their squad having worn the green and gold.  Laune Rangers were under-strength on the night however, & while they had County representatives Ryan Diggin, Eoin Clifford and captain David Mangan lining out, Rangers were without the services of – among others – Hassett brothers Gearóid & Eoghan as well as Seán Cleary, Roan Moriarty, Matt Leslie & Stephen Sealy – the latter picking up an injury in Saturday evening’s County League game that saw him miss out.

The stormy conditions made it very hard to play any kind of expansive football in, and both wind and rain were in the faces of the Laune Rangers team in the first half.  However, the visitors were the first to score, as Darragh O’Grady punched the ball over the bar after beating his man.  St Brendans scored three pointed frees through Dara Courtney & Fergal O’Brien (2) before their captain Padraig White scored their first point from play.  Laune Rangers levelled the game as a David Mangan 45 was held up in the wind and dropped in on the goalmouth where Devon Burns spilled the wet ball, and Marc Clifford had the quick reflexes to punch the ball to the net.  With fifteen minutes played, the scores were tied at 0-4 to 1-1.

Darragh O’Grady added a well taken point against the breeze to give his team the lead, but St Brendans soon snatched it back as they scored a goal – a long rang free dropping short before being spilled into the goalmouth, and after a few attempts from both sides to either score, clear or pick up the ball, it was eventually poked into the net.  This gave fresh impetus to the home side playing with the breeze, and they added two points late in the half to give St Brendans a four point lead at the break.

St Brendans got off to the perfect start against the wind as their captain Padraig White struck for a goal a minute into the second half.  The goal was cancelled out over the following minutes as Marc Clifford, Ronan O’Shea (free) and Eoin Clifford scored excellent points.  St Brendans wiped out the work done by Rangers though, with a third goal scored by Earnán Ferris but had Rob Monaghan dismissed with a black card.  With fifteen minutes to play, St Brendans led by 3-6 to 1-5.

Ronan O’Shea (free) & Calum Moriarty scored excellent points before Laune Rangers lost Ronan O’Shea to injury.  However, the visitors were thrown a lifeline as they scored a second goal – a great move downfield finished by Rory O’Connor who tapped the ball to the net, leaving two between the teams.  Fergal O’Brien added two points (one free) to double St Brendans’ lead but Laune Rangers didn’t drop their heads.  A Tom Whittleton goal left the minimum between the sides before Laune Rangers won a free 50 metres from goal after the kickout.  Darragh O’Grady stepped up & split the posts to level the game with the final kick of regulation.

With playing conditions now becoming dangerous, the majority of those in attendance had hoped that sense would prevail and a replay would be the safest option.  However, the game had to be finished on the day so the two rain-sodden teams emerged again from the dressing rooms for extra time as the floodlights were turned on.

Damien Doherty & Eddie McCarthy pointed two frees in the opening minutes of extra time, while Darragh O’Grady also spilt the posts with a free against the wind.  Adam Carey pulled off a great save to deny St Brendans a fourth goal, but Damien Doherty kicked another free to give his side a two point lead as the teams switched sides.

Darragh O’Grady pointed another long range free from outside the 45 to halve the difference.  However, Devon Burns came upfield to score a free into the wind and, while Rangers had the majority of possession in the final stages, they couldn’t break down St Brendans and Damien Doherty pointed with the final kick of the game.