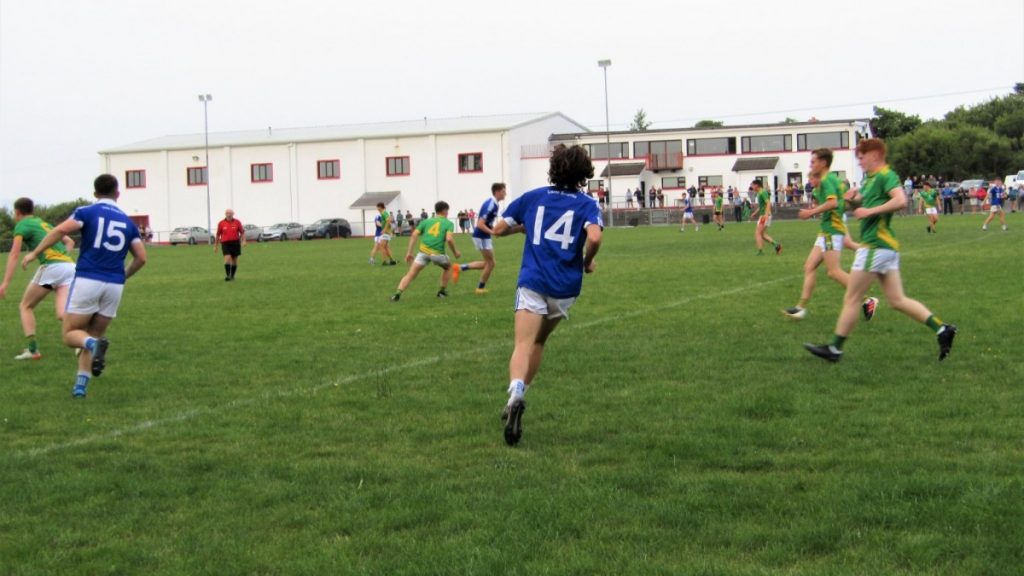 The County Minor Championship got underway on Monday evening, as Laune Rangers met South Kerry in the neutral ground of Glenbeigh in Round 1.

A strong South Kerry Board outfit have the addition of Templenoe and Tousist in this year’s competition, and are fancied to go a long way in the Championship.  On the other side, Laune Rangers had 11 of their first 15 making their Minor Championship bow on Monday evening, as only five of the starting team were in their final year of Minor.

Laune Rangers were first to register a score as Oisín Birmingham came upfield to slot a point, but the more physical South Kerry side were quick to respond, following the first goal of the game with 2 points to take a four point lead.  A pointed free by John Burke was cancelled out by a South Kerry point before Rangers goalkeeper Conor Buckley saved excellently.  South Kerry added a pointed free to take a 1-4 to 0-2 lead into the water break.

The game was taken away from the club side in the second quarter, as South Kerry blitzed Rangers for five successive points to double their lead.  Darragh Clifford pointed a free as Rangers pressed but, after a John Tuohy shot was pushed out for a 45, the resulting kick was cut out and countered quickly leaving South Kerry in to score their second goal.  Patryk Radny scored an excellent point from the left flank to leave Laune Rangers trailing by 11 at the break.

Rangers introduced Tom Garry at the interval and he gave his side fresh impetus.  Niall O’Brien scored a point in the first play of the half, although it was a point he may have rather not scored as he was hauled down in the square as he kicked the ball in what surely would have been a penalty had a score not come out of the play.  Darragh Clifford added a pointed free soon after and after South Kerry pointed a free, John Burke scored a brace (1 free).  South Kerry’s strength in depth came through though as they scored five consecutive points, although Laune Rangers did score a goal as Eoin O’Connell collected a super John Burke pass before finishing to the net.  As the whistle blew for a second half water break, South Kerry still led by 2-15 to 1-8.

After John Burke pointed a free, Rangers came close to scoring a second goal, but another outstanding save stopped the ball as it was destined for the top corner.  Laune Rangers were doing all the attacking at this point but couldn’t trouble the scoreboard operator and, as the Rangers defenders were upfield, South Kerry countered again to score a third goal.

In what was always going to be an uphill battle, the young Laune Rangers side struggled to match up against one of the competition favourites.  Two more tough battles against divisional sides in Mid Kerry and West Kerry remain in a difficult group, and Rangers are away to Mid Kerry on Tuesday next, July 26th.