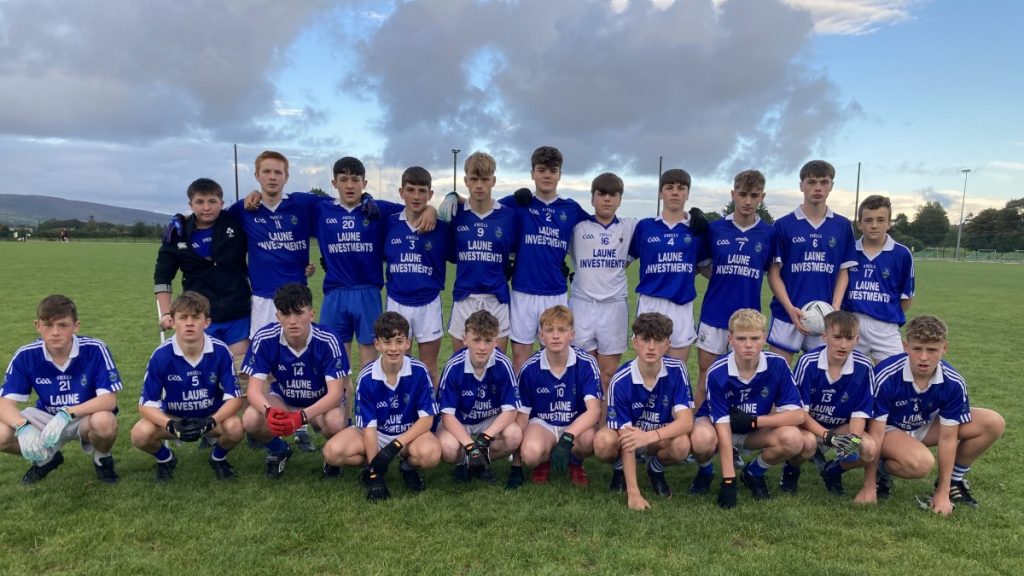 Laune Rangers will contest the Mid Kerry Under 15 Championship A Final as they defeated Milltown/Castlemaine in Paddy Burke Memorial Park on Wednesday evening.

After both sides had kicked a couple of wides each, Laune Rangers opened the scoring with a Liam O’Connell point and followed it with another from Bryan McKenna.  The home side grew into the game though, and scored the next three points to lead by 0-3 to 0-2 with fifteen minutes played.

Laune Rangers powered on in the second quarter and, after Aaron Doyle & John Horgan scored points, three goals in two minutes for the away side put them into what would be an insurmountable lead.  Colm O’Shea pounced on a loose ball in the small square to tap in the first goal, while a 45’ taken by Charlie O’Sullivan dropped short only for John Horgan to get a fist to the ball and send it into the net.  The third was a well taken goal by Alex Garry after the unfortunate Milltown/Castlemaine goalkeeper slipped as he took a kick out and midfielder Garry chipped the ball over goalkeeper and defence into the net.  Points were added by Tomás Joy, Bryan McKenna & James Jones to see Laune Rangers take a commanding lead into the break.

Milltown/Castlemaine began to close the gap in the early stages of the second half as they scored four points in succession (one free).  Tomás Joy pointed a free before Milltown/Castlemaine slotted two frees of their own to leave the home side trailing by 3-8 to 0-9 with fifteen minutes to play.

Laune Rangers were awarded a penalty as Charlie O’Sullivan made a piercing run forward from centre back before being fouled in the square, and James Jones made no mistake with the spot kick for his team’s fourth goal.  A John Horgan point followed before Milltown/Castlemaine were awarded a penalty of their own, but the shot tailed wide of the left post.  Points would be traded twice between the sides before the end of the game – Tomás Joy (free) and Alex Garry with the scores for Rangers.