INTERMEDIATE CHAMPIONSHIP FIXTURE: Laune Rangers will face Ardfert in the relegation playoff semi final for the Intermediate Championship.  The game will take place tomorrow (Saturday) at 4pm in Ballymacelligott.  Tickets are required for the game and can be purchased here

SENIOR LADIES FIXTURE: Laune Rangers will host Abbeydorney on Sunday next in the Semi Final of the Kerry LGFA Junior A Championship.  Throw in 12pm in JP O’Sullivan Park.  All support much appreciated.

UNDER 15 BOYS: The County Divisional Board Under 15 competition gets underway this weekend, with a trip to South Kerry on Sunday for the Mid Kerry team that consists of a number of Laune Rangers players as well as selector John O’Donnell. Best of Luck to all.

UNDER 13 BOYS: the Mid Kerry Under 13 Championship has begun and the two Laune Rangers teams face Keel/Listry in Division 1 and Division 2.  The Division 1 game takes place at 4pm with the Division 2 game at 5:15pm.

UNDER 11 BOYS PARISH LEAGUE: This Sunday sees the end of our Sunday morning sessions with the annual Parish League, where four teams made up of our Under 11 Boys will compete for the Seamus and Noreen Murphy Cup.

UNDER 7 & UNDER 9 BOYS: Our U7 and U9 boys finished their season last week with their final session.  Well Done to all players for a great season and thanks to all our coaches who give of their time so willingly every week.  We look forward to seeing you all back next year.  One person who has decided he won’t be there for next year is Fergus Clifford, who is stepping down from his role as Sunday morning co-ordinator after many years of work & dedication.  Huge thanks to Fergus whose contribution to our club is often unseen but has been incalculable.  We’re sure we’ll see him back in the not too distant future!

GIRLS NURSERY: The Under 6, Under 8 and Under 10 Girls finished up their season last week.  The Under 6 girls finished the season with a game against Milltown/Castlemaine, while the Under 8s had their final training session.  Meanwhile the Under 10s played the inaugural girls Parish League with some great football played.  All players received their medals afterwards along with the first ever presentation to the winners of the Parish league Cup & Shield.

GOLF CLASSIC UPDATE: Before last Monday night’s lotto draw, Golf Classic committee Chairperson Geoffrey Mahony presented a cheque to the value of €17,500 to club Chairperson Mary Quirke , thus wrapping up a fantastic fundraiser that was held in glorious weather in July.  We thank our two main event sponsors NKP Ltd (O’Keeffe Properties) and the Moriarty Group, along with all of our team, teebox, prize and refreshment sponsors for their fantastic support. Thanks also to all who took part in the fundraiser for making the day a hugely enjoyable one.   We also thank the team of hard working volunteers on the Golf Classic committee who organised and ran such a successful event. 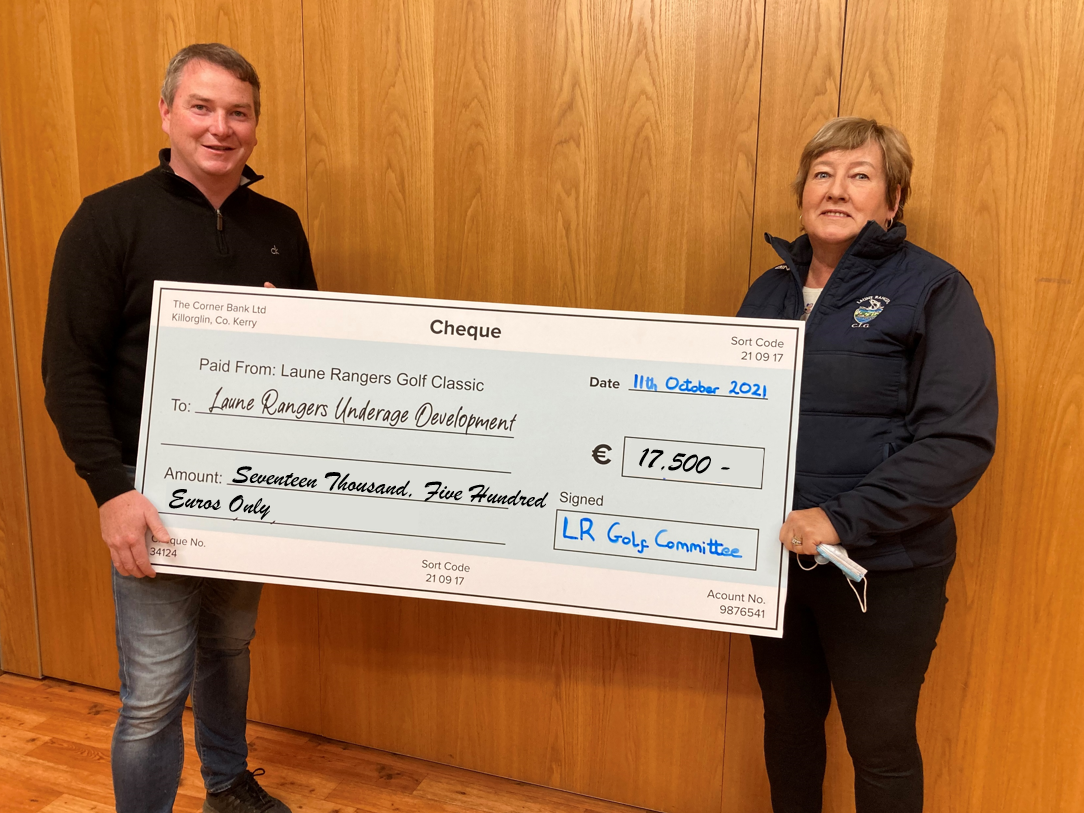