MEETING: Laune Rangers will have a club meeting on Tuesday next, May 3rd at 8pm in our clubrooms at JP O’Sullivan Park.  This meeting is open for all club members to attend.

SENIOR MEN FIXTURES: Both Laune Rangers teams in the County Senior Football League are away from home in Round 5 next weekend.  In Division 5, Glenflesk B host Laune Rangers B on Saturday evening, April 30th at 7pm, while Laune Rangers A travel to Castleisland Desmonds on Sunday, May 1st at 3pm. 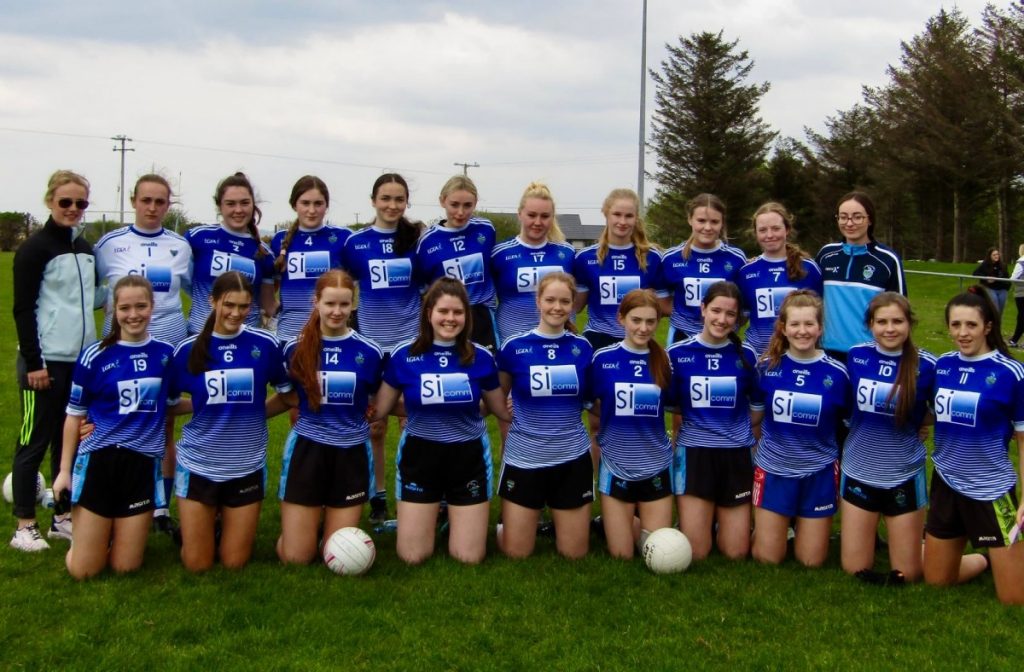 KERRY: Congratulations to the Kerry Under 20 side who defeated Cork on Monday evening to win the Munster Championship, especially our own Gearóid Hassett who was introduced from the bench and scored two crucial points on the way to victory.  Well done to the Kerry Under 14 Girls who had a great win against Mayo in the All Ireland Series on Saturday, especially our own Riadh O’Sullivan who was among the substitutes for Kerry

Gearóid Hassett in action for Kerry Under 20s on Monday evening.

G4MO: Laune Rangers are delighted to see our Gaelic for Mothers & Others return for 2022.  The group train on Monday evenings from 7pm – 8:15pm at the bottom pitch at JP O’Sullivan Park.  This is a fun 75 Minutes of non-competitive football to enjoy and get to know each other!  Contact Selina on 087 619 6676.

UNDER 15 BOYS FIXTURES: Laune Rangers take on Kenmare Shamrocks this week in the County Under 15 Leagues.  On Wednesday night, the White team host Kenmare in Division 9B, while the Blue team travel to Kenmare on Thursday evening.  Both games throw in 7pm.

UNDER 13 BOYS WHITE: Laune Rangers White Team enjoyed a great win on the road when they emerged 5-10 to 3-8 winners against Keel/Listry.  Despite some late withdrawals, which necessitated positional switches, Rangers got off to a flying start, with Odhran Clifford driving  through from centre forward to score a fine goal, followed by points from Jaego Ferris, Tommy Foley and Jack Buckley. Keel/Listry had a number of chances and Rangers had Fionan Quigg in goals to thank following a great save before Keel opened their account with a pointed free. Rangers hit back with 2 more points from Tommy Foley and Odhran Clifford before another pointed free for Keel/Listry. Tommy Foley then struck for a goal, with Keel/Listry replying with yet another pointed free. Liam O’Shea closed the Ranger’s scoring with a fine point, and Keel finished out with a brace of points.  Half Time Score:- Keel/Listry 0-5, Laune Rangers White 2-6.  Laune Rangers started the second half much like the first with James Kearney striking for a well taken goal.  However, Keel/Listry struck back, scoring 1-3 without  reply before Oisin Clifford scored a fine goal to steady the ship. Keel/Listry upped the pressure by scoring another goal, before Tommy Foley scored a scorcher of a goal, to keep the Rangers moving. At the other end, Luke Cleary made a vital block on a Keel/Listry shot on goal and Keel/Listry eventually had to settle for a point. Rangers then scored 3 points without reply through Liam O’Shea, James Kearney and Odhran Clifford. Keel/Listry got a final goal, but this was cancelled out by a fine goal by Tommy Foley to complete his hat-trick and end the scoring.  Full Time Score:- Keel/Listry 3-8, Laune Rangers White 5-10  The performance was the most cohesive of the campaign and was fully deserved given all the hard work at training. While those on the scoresheet again take the plaudits, all players were excellent, particularly Fionan Quigg in goals, Mikey Dwyer, Luke Cleary and The Kearney Bros James and Sean at the back, and Luke McGillycuddy in mid- field, with all players working hard on and off the ball.

UNDER 11 BOYS: Laune Rangers are competing in the Joe O’Connor/Tony Brosnan group of the County Under 11 Go Games this season.  Round 3 takes place this Thursday, April 28th at home to John Mitchels.  Throw in 6:30pm

MEMBERSHIP: Laune Rangers membership for 2022 is open.  Membership available from registrars Lawrence Laide on 0861969250, Pat O’Shea on 0877763457 or can be bought in Bunkers Bar.  Membership rates remain the same as 2021, ie:- Single membership €50; Family Membership €70; OAP Membership €20; Scór only €20.  Meanwhile to counteract the LGFA registration fees, a levy of €15 also applied to all LGFA (Ladies) players from U10 up and €10 for Under 6 and Under 8 girls.  Visit www.launerangers.ie/membership for more details or to pay online.

CAN YOU SPARE SOME TIME TO VOLUNTEER: As you can read from the above, the club is now extremely busy with all activities.  the Club is looking for volunteers to help out in a multitude of tasks.  As much as an hour per week would greatly help the overall running of the club.  These tasks range from, but are not exclusive to:

There is great scope for our members to use their knowledge and attributes in service to the club.  If you would like to help the club in any way, please contact club Secretary Emmet McCann on 087 9788 003 or email either or