INTERMEDIATE CHAMPIONSHIP: Laune Rangers are eliminated from progressing in the Intermediate Championship this year & will hav ae local battle in Milltown next week to avoid finishing bottom of the group, after defeat at home to Na Gaeil on Sunday afternoon.  Full Time Score:- Laune Rangers 0-11, Na Gaeil 1-9.  Read the Full Match Report HERE

INTERMEDIATE CHAMPIONSHIP FIXTURE: Laune Rangers travel to Milltown/Castlemaine on Sunday afternoon, September 26th in Round 3 of the Intermediate Championship.  Throw in 2:30pm in Paddy Burke Park.  NB This is an ALL-TICKET game, with tickets available online and no cash taken at the gate on the day.  Purchase your ticket HERE.  Under 16s can enter the ground without a ticket

SENIOR LADIES: Without a number of regular players, Laune Rangers Senior Ladies put in a fantastic performance – in the first half particularly – to pick up a great away win against Legion in the County Junior A Championship on early Sunday afternoon.  Full Time Score:- Killarney Legion 0-9, Laune Rangers 2-7.  Read the Match Report HERE

SENIOR LADIES FIXTURE: Laune Rangers will host MKL Gaels on Sunday next in the next round of the Kerry LGFA Junior A Championship.  Throw in 12pm in JP O’Sullivan Park.  All support much appreciated.

MINOR BOYS: Having secured the County League Division 1 title a couple of weeks ago, Laune Rangers went into the County Minor Championship in good spirits.  However, the Championship roll of honour shows that this competition favours Divisional teams, & the Mid Kerry outfit justified favouritism with a win by the minimum on Saturday evening in JP O’Sullivan Park.  Full Time Score:- Laune Rangers 0-10, Mid Kerry 0-11.  Read the Match Report HERE

MINOR BOYS FIXTURE: Laune Rangers will travel to face South Kerry on Saturday in the next Round of the County Minor Championship.  Throw in 3pm in Waterville.  Tickets are also available for this game.  Purchase online here.  Under 16s can enter the ground without a ticket.

UNDER 17 GIRLS: There was huge excitement in Cloon on Wednesday evening as Laune Rangers and Kerins O’Rahillys served up a fantastic game in the Under 17 Championship, but it was the older, stronger and more physical Tralee side that came out on top in the end.  The game started with Kerins O’Rahillys having only 13 on the field, but were up to the full complement after a few minutes.  Laune Rangers, probably conscious of their advantage in numbers decided to take points on each trip upfield.  Rangers led by seven points – Laura Leslie (2), Áine Nash Freeman (2), Sophia Doherty (2) and Aoife Cleary all pointing before Rahillys struck for their first goal.  Aoife Cleary added another point before Rahillys netted again and kicked two points to go in all square at the first water break at 0-8 to 2-2.  Laura Leslie pointed Rangers ahead again but Kerins O’Rahillys were in flying form at this stage and added an unanswered 1-3 to take a five point lead.  Aoife Cleary (free) and Laura Leslie added points either side of a Kerins O’Rahillys point to leave four between the teams at the break.  Half Time Score:- Laune Rangers 0-11, Kerins O’Rahillys 3-6.  Laune Rangers got off to a great start in the second half, and led as points from Aoife Cleary (2, 1 free) and Sophia Doherty were followed by a goal from Laura Leslie.  Rahillys pointed again before Rangers were struck with a hammerblow, as Laura Leslie left the field with a leg injury having scored 1-4 from midfield already.  Kerins O’Rahillys pointed again to see the sides go to the second water break all square at 1-14 to 3-8.  Laura Leslie moved into goals for the final quarter, with Éabha Dolan, herself returning from an injury, to move up to full forward.  With her first touch, she hit the net for a great goal to put Rangers ahead.  However, Kerins O’Rahillys responded and scored two goals in as many minutes to reverse the difference between the sides.  A point for the Tralee side put them four ahead, but points from Síofra Foley and Orla O’Brien halved the gap.  Rahillys added an insurance point as Rangers missed a late penalty to deny the draw.  Full Time Score:- Laune Rangers 2-16, Kerins O’Rahillys 5-10.  Laune Rangers:- Éabha Dolan (1-0), Grace Garland, Amy Kelly, Olivia Moriarty, Laura Patton, Orla O’Brien (0-1), Niamh Moriarty, Laura Leslie (1-4), Sophia Doherty (0-3), Erin Murphy, Aoife Cleary (0-5, 2f), Isabella Doherty, Áine Nash Freeman (0-2), Síofra Foley (0-1), Aisling O’Connor.  Sub: Aoife Fenton Toms. (Team photo at top of news page)

UNDER 15 GIRLS: Laune Rangers hosted Killarney Legion in the Under 15 Ladies Championship on Saturday evening last, but the Killarney side proved much too strong on the day to score a comfortable win.

UNDER 13 BOYS: Well Done to the two Under 13 Boys teams who won both Central Region games on Sunday afternoon.  The Blue team had a comfortable home win against Milltown/Castlemaine, while the White team scored a super away win in Connolly Park, defeating Austin Stacks by 1-8 to 0-10.

UNDER 13 GIRLS: Laune Rangers U13 girls made their way to Lewis Road on a sunny autumnal evening where they put on a great display of skills to come away with an impressive victory and a place in a final next week.  Dr Crokes played the first half facing in to a very bright sunset, which was hard on their eyes as the constant waves of attacks by the girls in blue.  Laune Rangers kicked an impressive 11 points in the first half.  Laune Rangers covered every blade of grass while putting on a display of excellent catching and kicking that their coaches should be proud of.  In the second half Laune Rangers played in to the sun which did not cause them as much concern as it did their rivals as they netted 4 great goals. As Rangers held an impressive lead the coaches took their opportunity to give some of the U12 team a chance to get some game time and they rose to the challenge without faltering.  Dr Crokes took advantage of the sun in their opponents eyes  by delivering some high balls which rewarded them in a few scores. The Laune Rangers girls have to be commended with their passion to play great football as the game was drawing to a close and showing a fantastic team spirit. 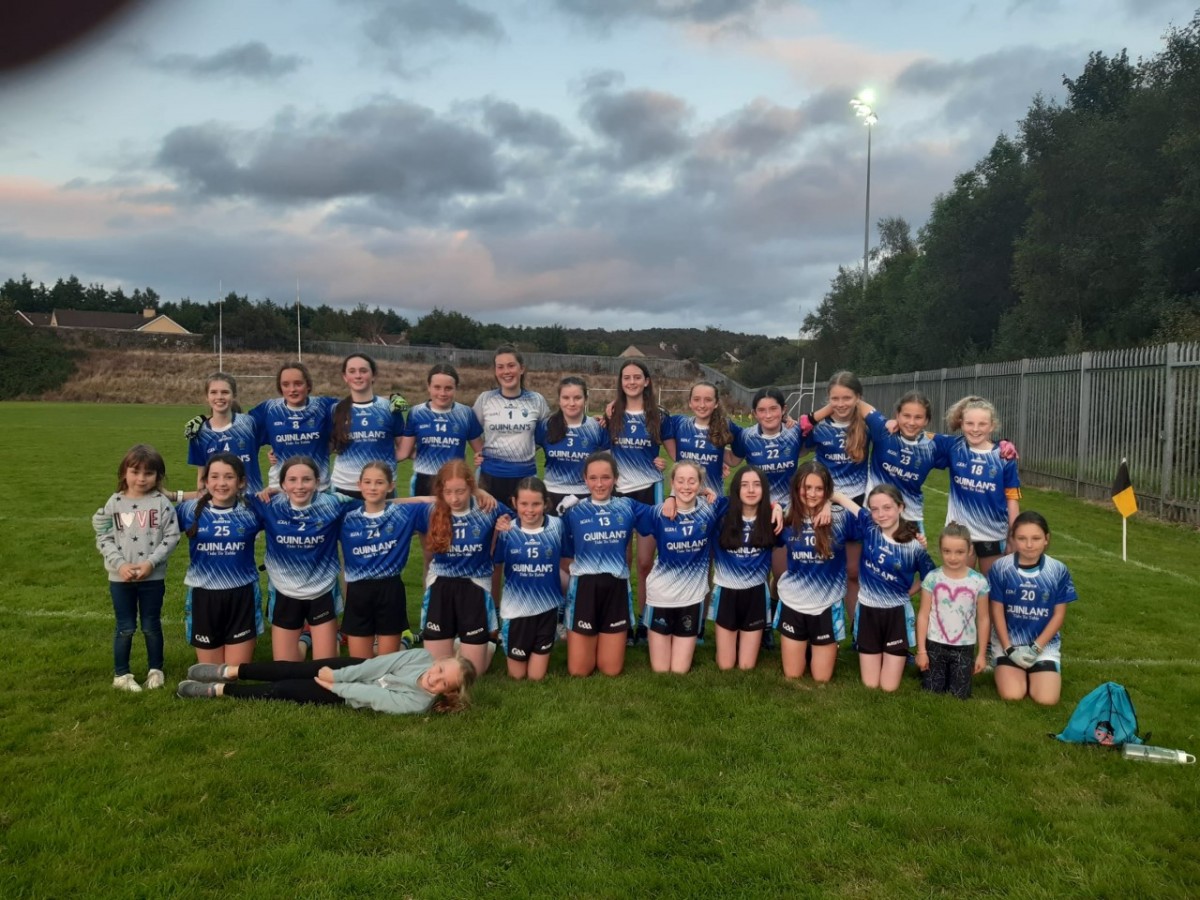 Under 13 Girls vs Dr Crokes